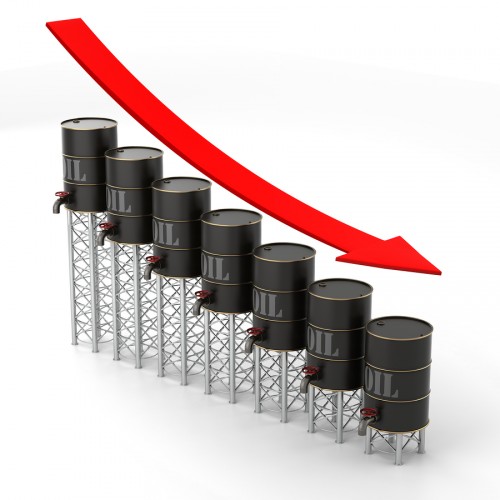 HOUSTON – Prices for the risky corporate bonds that have fueled the U.S. shale energy boom are plummeting as oil prices have fallen below $60 a barrel for the first time in more than five years.

The U.S. energy-sector’s high-yield bond prices, known as junk bonds because they carry high risk for investors, have dropped 18.9 percent since the end of June to the close of trading Friday – putting the sector on track for its worst performance in returns since the financial crisis of 2008, according to Barclays.

Most of that decline has occurred in the last 30 days. It’s already making it harder for oil companies to reach out to the financial markets to fund more of their drilling operations, as “in the high-yield space there’s a distinct lack of liquidity in the market right now,” said Larry Whistler, president and chief investment officer at Nottingham Advisors.

Whistler said investors are getting nervous about collateral damage to other sectors, but added he doubts any fallout will be far-reaching.

Other industry observers are less optimistic: The $173 billion in U.S. energy junk bonds make up the biggest portion of the high-yield debt market after the Federal Reserve set low interest rates for years and pushed yield-starved investors toward riskier investments.

Now, as prices for those bonds are in free fall, those investors may begin wondering “what sector would be next,” prompting them to avoid or sell off more debt-market sectors, said Phil Flynn, senior market analyst at Price Futures Group in Chicago. “It doesn’t take a lot for one sector to affect another.”

Prices for the entire spectrum of U.S. corporate bonds have tumbled 7.7 percent since June, and are also set to perform worse than any year since the U.S. credit crunch six years ago, according to Barclays.

The British bank’s data shows U.S. energy bonds’ option-adjusted spread – a measure of risk for fixed-income instruments – has more than doubled since June, and the spread for U.S. corporate debt has jumped 63 percent.

The sharp selloff comes as a handful of small oil companies are approaching or have exceeded 20 percent yields, analysts with Tudor, Pickering, Holt & Co. said in an investor update Monday.

The analysts noted that large operators like Occidental Petroleum and EOG Resources have “fared well with little change to yields.”

For companies including Oasis Petroleum, Laredo Petroleum, Rosetta Resources, EP Energy Corp. and Carrizo Oil & Gas, “where we see significant equity upside on core tier 1 assets and where budgets can be pared back to cash flow, we’re less worried,” they wrote.

A Crude Awakening for General Electric

‘No’ On Keystone Pipeline — But GOP Vows Replay

There are no upcoming events.