A few days ago Chesapeake Energy announced the sale of non-core assets in its Marcellus and Utica shale plays to Southwestern Energy for $5.4 billion. [1] As part of this sale, the company will divest over 400,000 acres and about 1,500 wells in Western Virginia and Southern Pennsylvania and generate cash flows from assets that are not central to its growth plans. In our note below, we take a look at Chesapeake’s motives in organizing this sale.

The Texas based company is focusing on three specific areas in order to unlock value for its shareholders:

Unlocking Value in the Marcellus Shale

The third area that Chesapeake Energy had been looking at to fuel its future growth was the potential spin-off of its Southern Marcellus shale assets. Even though these assets were generating strong returns for the company, those returns could be even stronger if the assets were no longer a part of Chesapeake. In an investor presentation in August, the company had noted that the asset could generate nearly 50% organic production growth if it were set free. 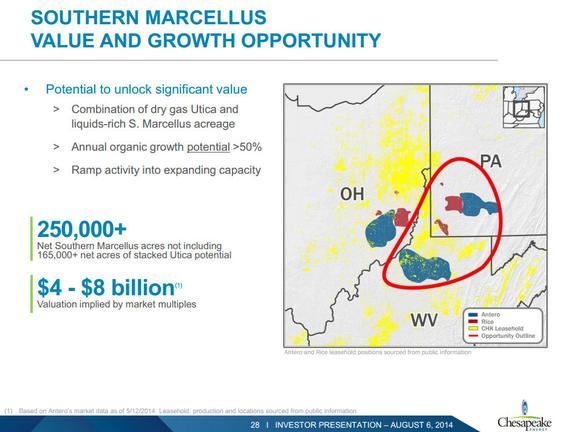 The company estimated the value of its non-core assets in the southern Marcellus shale and the Utica shale plays at $4 billion to $8 billion based on the market valuation of some of its peers. [2] Despite considering the idea of spinning off the asset to unlock its value, the company has decided that a more efficient way of achieving its goal was the sale of this acreage to Southwestern Energy. The sale will provide the company with a bucket load of cash that it can invest in other potentially profitable ventures to fuel even more shareholder value. The deal will also contribute further to the improvement of its balance sheet. Chesapeake can now use its new cash to make acquisitions, buy back shares, or accelerate growth. The company expects the sale will have no impact on its growth because these assets were not a core part of its growth plans, which is why it still expects to deliver a 7%-10% production increase next year even as it maintains a tight capital program.

There are no upcoming events.